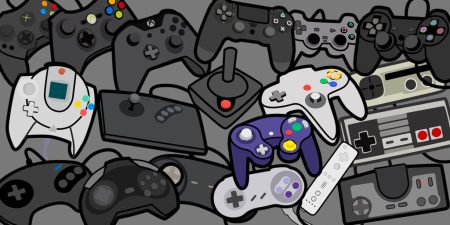 With video game companies often cashing in on the nostalgia by remaking, remastering, or rebooting beloved franchises, such as Crash Bandicoot or the Spyro series, the question I find myself and my video game fans asking, are video games getting easier?.

Now, I remember Pokemon Mystery Dungeon: Red Rescue Team being quite tricky growing up. As I’m playing this remake, I haven’t been having many troubles other than getting buttons confused, but that comes with the territory. I quickly noticed how easy this game is now. Unless I haven’t hit the difficulty spike, I’ve had little to no problems working my way through the game.

So this begs the question, did they make this game more accessible to the younger audience, or did I just get better at strategy games overall? Well, I think I just got better by playing more strategy games such as Octopath Traveler, Chocobo’s Mystery Dungeon, and all of the later entries in the Pokemon Mystery Dungeon series. I think with time and experience with other video games of the same genre, I might just have a better grasp on how to play the game than when I was a kid.

However, I’d like to hear your opinion! Do you think video game companies are making video games easier, or do you think you’ve just gotten better at playing the games?

If you would like to help support me, CLICK HERE to become a member and receive exclusive blog posts, only supporters will get to see! 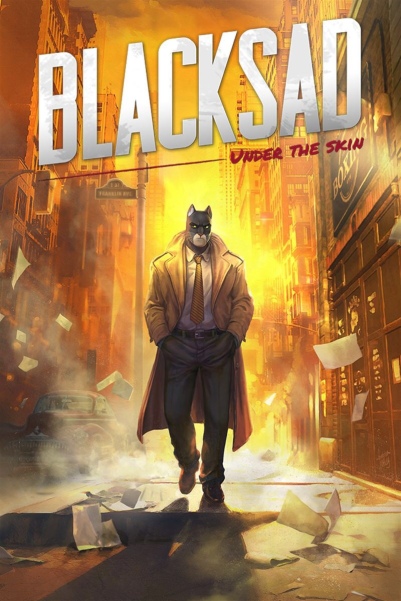 Blacksad: Under the Skin is set in New York City during the 1950s, and takes place chronologically between Blacksad: Arctic Nation and Red Soul. Its story begins when protagonist John Blacksad is approached by Sonia Dunn, daughter of a boxing club owner who has died suspiciously. She asks Blacksad to investigate the situation and locate the club’s starfighter, who has been missing since her father’s death. So it’s up to Blacksad to solve the case, or the daughter will have to shut down her father’s gym forever.

I love the Blacksad series. I am a huge fan of crime noir and hardboiled detectives. This is the perfect series for those that love mysteries and anthropomorphic animals. Blacksad is a private detective who deals with the scum of the Earth. He likes to help others when he can, especially if they are a helpless female.

This game is a must for mystery lovers and visual novels alike. Just when you think you have solved the case before Blacksad, the game throws a wrench in your theory. There were several theories Blacksad had and I was asking him where he came up with that. Nothing against the character himself, it’s just part of being a detective.

I admire how much joy and care the developers put into this game. I can tell they read and studied the graphic novels and took the material to heart when creating this game. The characters are well written and this case was built in a way where I couldn’t solve it before the Blacksad.

Overall, I love this game and I think it’s worth the money for any fans of Blacksad, crime noir, historical fiction, and hardboiled detectives. This game was well worth the money, although I do recommend waiting for it to go on sale, buy it nonetheless. Blacksad: Under the Skin is a great game for fans of Blacksad or just looking for a new mystery to solve. 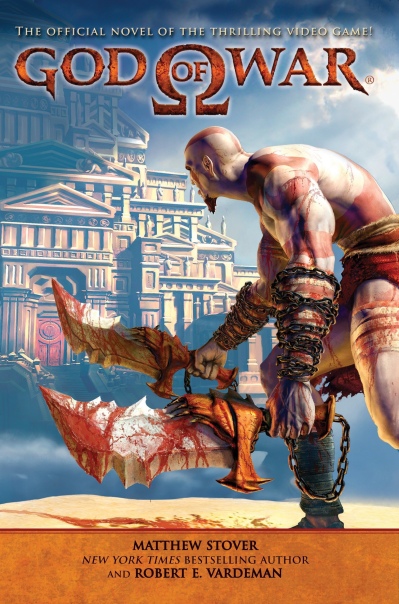 *Possible Spoilers for the God of War Games*

A brutal warrior, Kratos is a slave to the gods of Olympus. Plagued by the nightmares of his past and yearning for freedom, the Ghost of Sparta would do anything to be free of his debt to the gods. He is on the verge of losing all hope when the gods give him one last task to end his servitude.

He must destroy Ares, the god of war.

But what chance does a mere mortal have against a god? Armed with the deadly chained Blades of Chaos, guided by the goddess Athena, and driven by his own insatiable thirst for vengeance, Kratos seeks the only relic powerful enough to slay Ares . . . a quest that will take him deep into the mysterious temple borne by the Titan Cronos!

From the black depths of Hades to the war-torn city of Athens to the lost desert beyond, God of War sheds a brutal new light on the bestselling video game and on the legend of Kratos.

I have been a fan of Greek Mythology for a long time. With the Percy Jackson series introducing young readers into the mythos in a kid-friendly way, God of War is basically Percy Jackson for adults. The video games are well known for their antihero Kratos, who let his bloodlust go too far and cause pain and death all around him.

If you’re familiar with the video games, then you are familiar with Kratos’ backstory. He is a Spartan who asked Ares to become his apprentice. This decision haunts him as he seeks relief from the nightmares and the decisions his younger self made in the past.

Overall, I thoroughly enjoyed God of War. The action, adventure, and feelings of other stories inspired by Greek Mythology were enough to keep me enthralled in the story. I haven’t played or watched any of the God of War games myself, but knowing there are novelizations of the games makes me want to continue on the adventure.

I would highly recommend this novel for fans of the Percy Jackson series as well as fans of Greek Mythology in general. There is plenty of action, adventure, and plenty of Greek gods to keep you invested in the story. I can’t wait to jump back into the world and continue on with Kratos. 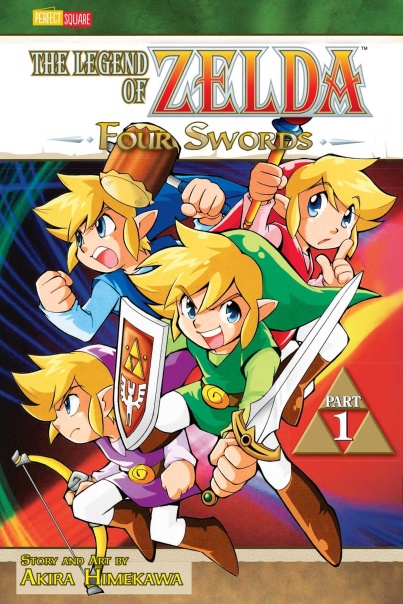 Link, now a Hylian Knight, serves Princess Zelda at Hyrule Castle. When Shadow Link kidnaps Princess Zelda, Link once again must prepare himself to defeat the forces of evil. To do so, he needs the legendary Four Sword, but getting it means releasing and then battling the ancient evil power Vaati. The Four Sword also splits Link into four different versions of himself, and these new Links aren’t team players! Rescuing Zelda, beating Vaati, and getting his wild alter-egos under control isn’t going to be easy!

I enjoy the lore behind The Legend of Zelda series. However, I find most of the games to be boring. I prefer to watch someone else play the games in the background while I sleep. So I have been wanting to review one of The Legend of Zelda mangas for a long time now, so let’s dive into this adventure series!

First off, I watched a collaborative let’s play on YouTube with some of my favorite YouTube personalities. It was fun watching them trying to cooperate with each other. The four of them with their own unique playstyles trying to figure out the game and its puzzles were interesting and brought me a lot of joy.

Now back onto the book. The first thing I noticed and really enjoyed was that they actually gave Link a vocal personality and that he had the title of a Knight in Hyrule and his dad was the one in charge of the Knights of Hyrule. This change of pace from the games was something of a refreshing take on the series outside of Link and his “HYAA! HEY! YAA!”

With all of the aspects of the various personalities of Link unleashed by the Four Sword, Green Link, the original Link, has to keep the 4 of them from getting side-tracked. The other three Links outside of the Green one wore a different color tunic and hat. the red one had more of a laid back personality, the blue one was really angry and feisty, and the purple one was more of the nerdy researcher if I understood that right based on the descriptions. With these personalities, they had to work together to save the Princess, a very arduous task considering that Dark Link kept antagonizing by trying to separate them.

If you want to know more about the story than what I’ve put here, then you’re just going to have to pick up the book and read it. This is a good read and I’d definitely recommend it to any Legend of Zelda fan and or a fan of manga. 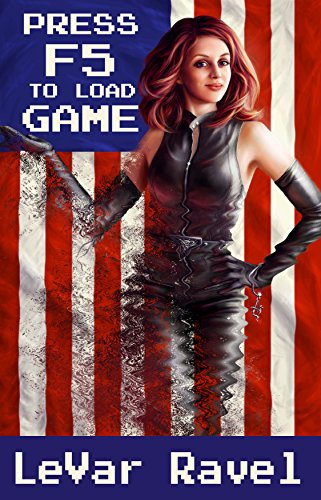 All the State House gossips go abuzz when an influential senator forms an alliance with Rep. Frannie Upwood, the capital’s most famous underachiever and the favorite butt of jokes. Why his sudden interest in such a lightweight politician?

It’s up to Lars Uxbridge, the senator’s disloyal staffer, to find out after he joins a network of political spies. What Lars discovers is a secret far beyond anything other state reps can muster. To get ahead in politics, Frannie’s got something better than snappy slogans, wealthy donors, and door-to-door volunteers.

She’s got a time machine.

Frannie shows that when you’re armed with time travel, you’re the star athlete in a game where the world is your playing field, you make your own rules, and you always beat the shot clock.

But as Frannie will learn, this game has opponents to contend with. Rivals who might not play fair. When the prizes are enormous power, money, and control of time itself, watch out for cheat moves and low blows…

This novel was offered to me through the BookSends ARC Program. This novel caught my attention because I thought the concept of mixing time travel and politics sounded interesting.

I was expecting a story like other time travel media, such as Bill and Ted’s Excellent Adventure, Doctor Who, and Back to the Future where the main characters have a vehicle that they use for their time traveling hijinks. This took a different spin on the whole time travel subgenre. Frannie uses a clunky bracelet-type contraption with the buttons “F8” and “F5”.

As Frannie explains, F8 is to make a “quicksave” and F5 is to “reload the previous save”. So if she wanted to she could get government secrets and not live through the consequences. As soon as she goes back to her previous save, her crimes will cease to exist.

If I had to put percentages to the content, it’s 80% politics and 20% time travel hijinks. If you are fans of political thrillers, this is the novel for you.

“A good game amuses us. Even better ones create characters we can believe in, with compelling goals and treacherous obsticles. The best games of all integrate these factors with an interactive challenge for our brains and reflexes. A mix powerful enough to transplant us into a whole new world where we can role-play to our heart’s content. The kind of thing that used to be the stuff of dreams” – Frannie Upwood

However, I felt like the characters were well developed and I could relate to them on various levels. Lars and Frannie’s relationship throughout this novel is intriguing. Lars stumbling upon Frannie’s big secret, and whether Frannie is just over-trusting or whether she knows more than she’s letting on.

All in all, I would highly recommend this novel for lovers of political thrillers, time travel, and science fiction in general.