*Small trigger warning for brief mentions of gore and torture*

Failed academic Frank Nichols and his wife, Eudora, have arrived in the sleepy Georgia town of Whitbrow, where Frank hopes to write a history of his family’s old estate-the Savoyard Plantation- and the horrors that occurred there. At first, the quaint, rural ways of their new neighbors seem to be everything they wanted. But there is an unspoken dread that the townsfolk have lived with for generations. A presence that demands sacrifice.

It comes from the shadowy woods across the river, where the ruins of Savoyard still stand. Where a longstanding debt of blood has never been forgotten.

I started this audiobook not knowing what to expect. At first it was reminding me of The Curse of Crow Hollow by Billy Coffey. The main character comes into this small town and maybe not everything is as what it seems. The end result is something dark and twisted that will leave you stunned.

“That was a mean thought, and not funny at all. I let it turn to sand and blow out of my head.”

Christopher Buehlman, Those Across the River

I love how dark, yet beautiful this story was thematically. When Frank and Eudora were just going to the store in broad daylight, you could feel the heavy and intense atmosphere. The financial strain everyone was facing, the PTSD Frank was suffering, and the aftermath of the ending of the ritual made the world feel unnerving.

One thing I didn’t like was how hard it was to keep track of most of the townsfolk. I’m not sure if that was intentional because that seems to be a trope in the horror genre. Where everyone except the main character(s) are cardboard cutouts and monster/demon fodder. I know it’s a necessary evil to convey how full and alive this town is, but even one of the minor plot twists made me feel indifferent.

Overall, this was a beautifully written novel full of small town horror, sophisticated romance, and dark suspense. Frank’s perspective on everything made the townsfolk seem sinister, even when the pastor himself fought to keep the pig ritual reinstated. Frank learns the devil lived in Whitbrow, and the devil soon destroyed the town in the end.

I would recommend this novel to fans of horror, historical fiction, and for fans of The Curse of Crow Hollow and Daughters Unto Devils by Amy Lukavics. This story is a great read and would encourage anyone thinking about either getting a fresh take on horror, or just looking for some early Halloween vibes, then I would definitely recommend this book.

Located just forty-five miles north of New York City and isolated in the hills of Putnam Valley, Lake Oscawana is the perfect summer getaway. At least, that was what April’s mother told her when she dropped April and her brother off to spend the season at their uncle’s lake house. It wasn’t bad at first. April thought she might’ve finally found someone that made her feel like family and a place she could actually call home. But April grew worried when she found something living in the water. Something strange. Something growing. She wanted to tell someone and sound the alarm, but April would have to learn the hard way that not all monsters lurk beneath the water.

I found this novel on Twitter, a lot of authors I follow retweet their friends’ works. I thought the premise was unique and I couldn’t wait to jump into Oscawana: A Monster Novel!

I feel that the author did a really good job of making Lake Oscawana seem isolated and far away from civilization even though it is in Upstate New York. I felt like I was in the depths of Canada for as far as April had to travel just to get to the nearest small town.

Early in the novel, April stumbles upon the monster when he’s still small and not threatening. They quickly develop a friendship that grows as the monster, who April named Oscar after the lake he lives in, grows in size.

The build-up to the climax is really slow, we’re mostly following April as she watches Oscar grow into an actual killing machine. Even when April comes to this realization, I found Oscar just as adorable and harmless as when April first found him. Oscar reminded me of a genetically modified dog.

April as a character feels so ingenuine from one moment to the next, more or less for the first half of the novel she is your standard teenager who has been let down by the adults around her. Then after the climax, her motives and reasons flip flop. I can’t go into more detail due to spoilers, but it was frustrating.

Shocked, Brad pulled back from the water and watched in horror as what he assumed to be blood spread out like a blooming flower. The crimson tinge was thick and slimy, bouncing a blinding ray of light in Brad’s eyes. He couldn’t look away, though. Brad stared at the ever-expanding slick of blood as it continued to grow until it completely surrounded the boat. –Oscawana: A Monster Story

I feel the ending to be lackluster, the ending feels like there could have been enough for a sequel or even a short story sequel. The ending left me feeling unsatisfying and left me with a lot of questions. Will April reunite with Oscar? Where did Oscar come from? What will happen to Oscar? Maybe these questions will be answered in some way.

Overall, I have mixed feelings towards Oscawana. I think it’s an alright story. I was expecting more monster action but was disappointed when 80% was about the human characters and their drama. If you’re looking for a quick read, I would recommend this novel. The action was great, and the heart and emotion were as well. 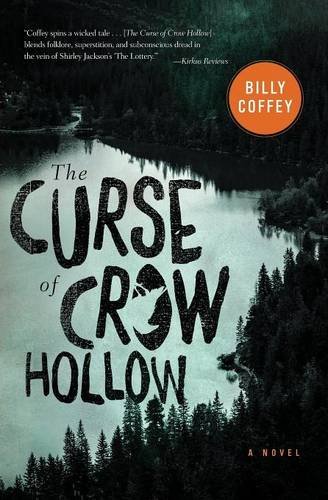 Everyone in Crow Hollow knows of Alvaretta Graves, the old widow who lives in the mountain. Many call her a witch; others whisper she’s insane. Everyone agrees the vengeance Alvaretta swore at her husband’s death hovers over them all. That vengeance awakens when teenagers stumble upon Alvaretta’s cabin, incurring her curse. Now a sickness moves through the Hollow. Rumors swirl that Stu Graves has risen for revenge. And the people of Crow Hollow are left to confront not only the darkness that lives on the mountain but the darkness that lives within themselves.

When I borrowed this audiobook from the virtual library, I honestly wasn’t sure what I was going to get. I thought it might be a cozy mystery disguised as something scary or ominous. However, here lately I’ve had some decent luck with the mystery/horror genre so I thought I’d give it a try.

This novel really strikes home that when a community has something to fear, such as the witch on the mountain, they’re looking for anything to blame that’s not themselves. When people of a close-knit, closed-off community face something that they cannot identify, they need a scapegoat to place the blame.

When the girls of Crow Hollow fall ill, it reminded me of The Crucible. How the main group of girls who went up to the mountain got “cursed” and soon every girl in town started falling ill as well. In The Crucible a small group of girls in an English colony start misbehaving and claiming that someone in the colony is a witch, and soon it becomes too real, but the girls can’t just come forward and said they were making their sicknesses up just to get attention from the townsfolk.

I found this novel to be somewhat predictable. There was a couple of twists I didn’t see coming, so that’s good. It’s not fun when you’re reading the book and know what’s going to happen before the characters do.

I liked the way the author presents the story like you’re having a discussion with the narrator. I thought this was unique and really brought home that southern charm the novel portrays.

All in all, I found The Curse of Crow Hollow to be a fun and entertaining read. If you like small-town mystery, horror, mystery, and small southern town charm, then I would recommend this novel.