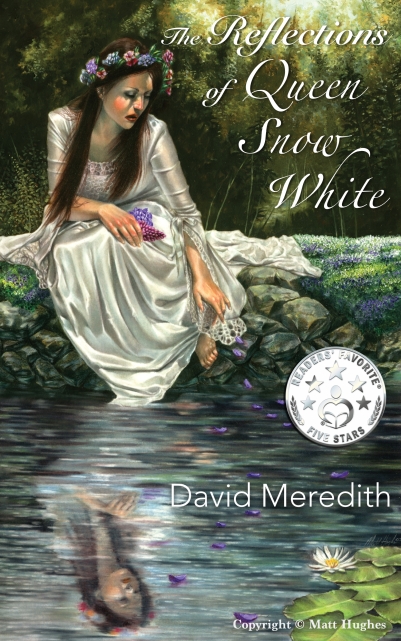 What happens when “happily ever after” has come and gone?

On the eve of her only daughter, Princess Raven’s wedding, an aging Snow White finds it impossible to share in the joyous spirit of the occasion. The ceremony itself promises to be the most glamorous social event of the decade. Snow White’s castle has been meticulously scrubbed, polished, and opulently decorated for the celebration. It is already nearly bursting with jubilant guests and merry well-wishers. Prince Edel, Raven’s fiancé, is a fine man from a neighboring kingdom and Snow White’s own domain is prosperous and at peace. Things could not be better, in fact, except for one thing:

The king is dead.

The queen has been in a moribund state of hopeless depression for over a year with no end in sight. It is only when, in a fit of bitter despair, she seeks solitude in the vastness of her own sprawling castle and climbs a long disused and forgotten tower stair that she comes face to face with herself in the very same magic mirror used by her stepmother of old.

It promises her respite in its shimmering depths, but can Snow White trust a device that was so precious to a woman who sought to cause her such irreparable harm? Can she confront the demons of her own difficult past to discover a better future for herself and her family? And finally, can she release her soul-crushing grief and suffocating loneliness to once again discover what “happily ever after” really means?

Only time will tell as she wrestles with her past and is forced to confront The Reflections of Queen Snow White.

I was contacted by the author to review his novel and to finally come across a fairytale retelling that isn’t based on Alice in Wonderland. So let’s see how this retelling of Snow White stands up.

This novel starts as we find Queen Snow White lost in a state of despair and depression over the death of Prince/King Charming’s death over a year ago. While wandering around the castle she stumbles upon her stepmother’s room. She then finds the magic mirror and soon is forced to face her past.

Overall, considering everything life has thrown her way I honestly wouldn’t blame her for being in a catatonic state. However, she works through all the pain with the magic mirror. He helps her see things for how they really happened, not through the bias and pain she’s built up as a defense.

The story is primarily told through memories and flashbacks. I thought this was an interesting way of telling the story. Snow White and the magic mirror have a long in-depth conversation about how Snow White is seeing things all wrong.

At first, I was concerned that this whole story was going to make it where Snow White feels better instantly. Sadly that’s not how depression works it takes longer than an intense conversation to cure her of her sadness. However, the author shows that Snow White feels better as she learns to see Prince Charming in their daughter, and thus loving what she already has versus missing all that she has lost.

This novel is well written, and I felt like I was transported to Snow White’s kingdom and reliving her memories with her. The author took his time writing this novel and putting a lot of love and care into this world to tell Snow White’s story.

Overall, I really enjoyed this novel. The Reflections of Queen Snow White is a novel I’d recommend for lovers of fairytales and overcoming mental illnesses. Here’s another one where you better have a box of tissues while you’re reading. Snow White learns to live her life again. No one is going to do it but her, however at least she knows she’s no longer alone in the world.

Read on Kindle Unlimited; or with your Audible Subscription.

One thought on “REVIEW: The Reflections of Queen Snow White by David Meredith”