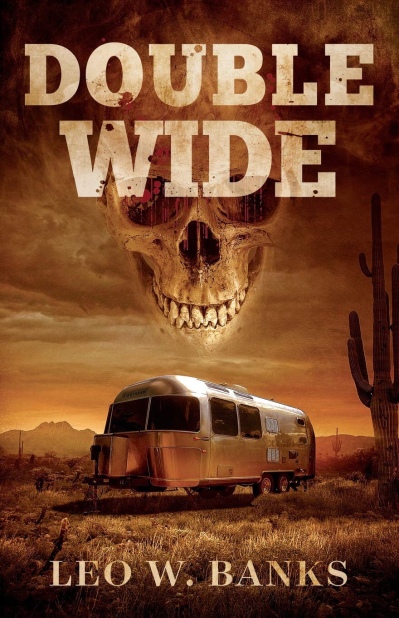 After fastball phenom Prospero Stark’s baseball career craters in a Mexican jail, he retreats to a trailer park in the scorching Arizona desert. He lives in peaceful anonymity with a collection of colorful outcasts until someone leaves his former catcher’s severed hand on his doorstep. Beautiful, hard-living reporter Roxanne Santa Cruz, who keeps a .380 Colt and a bottle of Chivas in her car, joins Stark to help him uncover his friend’s fate, a dangerous pursuit that pits them against a ruthless gang of drug-dealing killers.

This novel caught my eye because of the cover art. The imagery of the parched, Arizona desert with the lone camper trailer gave me the impression of a modern-day western.

I found Double Wide to be an entertaining read. Prospero just wanted to disappear from the spotlight after being caught with his best friend who had some cocaine, on top of him losing his throwing arm. However, when the disembodied hand appears, it throws Prospero back into the spotlight as he tries to solve his friend’s murder.

I found Roxanne to be a little annoying, I felt like she was manipulating Prospero to do things that might be considered unethical. Like showing up on the doorstep of the hottest baseball manager in town in the middle of the night. Even though it was all for a good cause, I didn’t like how Roxanne was controlling the narrative when she was involved.

I enjoy baseball from time to time, and I thought a sports-related mystery made this novel and intriguing read! Even if you’re not familiar as the sport, the rules and techniques are explained in a way where anyone could understand what was going on.

If you’re looking for a mystery novel that combines the love of baseball with the struggles of drug cartels along the Mexican border; this is the book for you!