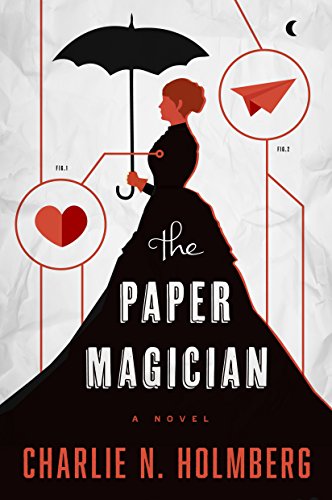 Ceony Twill arrives at the cottage of Magician Emery Thane with a broken heart. Having graduated at the top of her class from the Tagis Praff School for the Magically Inclined, Ceony is assigned an apprenticeship in paper magic despite her dreams of bespelling metal. And once she’s bonded to paper, that will be her only magic… forever.

Yet the spells Ceony learns under the strange yet kind Magician Thane turn out to be more marvelous than she could have ever imagined — animating paper creatures, bringing stories to life via ghostly images, even reading fortunes. But as she discovers these wonders, Ceony also learns of the extraordinary dangers of forbidden magic.

An Excisioner — a practitioner of dark, flesh magic — invades the cottage and severely injure Magician Thane. To save her teacher’s life, Ceony must face the evil magician and embark on an unbelievable adventure and reveals the very soul of the man.

I’ve seen this series floating around on my book clubs and groups. The premise seems intriguing, a magician who can wield paper is rather an odd concept. So I jumped into this novel, cautiously optimistic.

On Goodreads, this is not classified as a “romance”. There are certainly romantic themes in this novel. As Ceony is off to rescue her mentor and starts to learn about him, his past, his hopes, and dreams. She steadily falls in love with her mentor, and this drives her further into figuring out a way to rescue him.

As the journey kept going, I started to grow less and less interested. The romance got to be very boring, and sure it was interesting to learn more about Magician Thane. However, her slow progress as “time is ticking away” aspect doesn’t feel like it doesn’t meet expectations sort of like it actually doesn’t matter.

My opinion being what it is, I don’t really want to recommend this book, but if you are still interested this book would be better suited to someone who prefers books about romance.

Buy it on Amazon!